Here is a player whose name I pronounced wrong for several years: 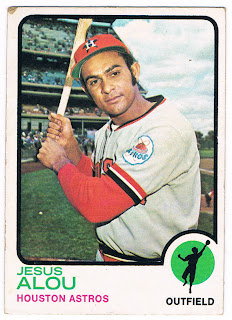 Card #93 -- Jesus Alou, Houston Astros
Where I grew up, we had little interaction with Latino culture, so I simply assumed Jesus Alou pronounced his first name the way we English-speaking Christians pronounced the name of the Big Guy on the Cross. Later, I started Spanish class when I went to high school and learned that it's pronounced "Hey-ZOOS." For what it's worth, I also mispronounced Ivan DeJesus's name until I started watching him on TV.

I also didn't realize he was one of three brothers, either, since Matty and Felipe Alou had retired before I became interested in baseball. Jesus was the youngest of the three, coming up with the Giants in 1963, while his brothers were both already on the team. At times, all three bothers played in the outfield at one time. However, his power numbers were much weaker than his brothers' and the Giants exposed him for the 1969 expansion draft.

While he was selected by the Expos, Alou didn't play for them. He ended up being traded to Houston in the deal that sent Rusty Staub to the team. He remained with the Astros until midway through the 1973 season, when the A's purchased his contract. After the '74 season, he went to the Mets as a free agent but didn't stay long. He played in the Mexican League until his return to the Astros in 1978. During his final season in 1979, Alou moved to a coaching position, and was a scout for a long time after his retirement.

He was also part of an extended baseball family. In addition to his brothers, his nephew Moises Alou, cousin Jose Sosa and nephew Mel Rojas were also major league players.
Posted by Chris Stufflestreet at 8:30 AM