This guy was a key member of the A's dynasty years, holding down the all-important "hot corner": 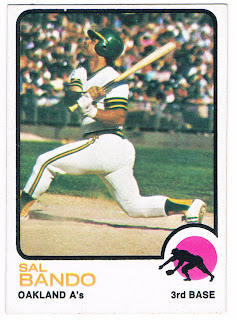 Card #155 -- Sal Bando, Oakland A's
Of course, he doesn't look so important in this picture, as he watches the arc of a ball he just popped up.

Sal Bando came up with the A's while they still played in Kansas City, and was one of the first building blocks of the team that would win three straight World Series. Between those three Series and five straight ALCS appearances, Bando often provided some of the fireworks. He clubbed five homers in ALCS play, including the series-winning shot in 1974.

All good things eventually end and Charlie Finley dismantled his team after it began to decline in 1976. Bando became involved in a salary dispute before the 1975 season and bitterly left after '76 as a free agent. He signed with the Brewers and spent four seasons there. He was a player/coach the final two years and filled in where he was needed. After being mainly a third baseman with the A's, he played all four infield positions in Milwaukee. He also served as a DH and even pitched two innings of a game in 1979.

After retiring, Bando moved to the front office. He served as an assistant to the Brewers' GM until assuming that position from 1991-99. He was also an occasional broadcaster for NBC's Game of the Week telecast.
Posted by Chris Stufflestreet at 8:30 AM