When the 1972 season began, this player was designated as a coach and pitched batting practice: 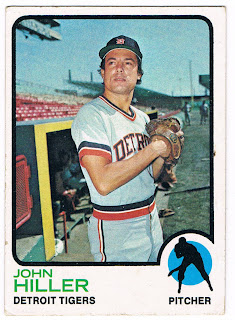 Card #448 -- John Hiller, Detroit Tigers
John Hiller had suffered a heart attack early in 1971, and had been out of the game ever since. A fairly effective reliever and occasonal starter for the Tigers from 1965-'70, his appearance in the 1968 World Series was less than stellar. The Tigers went on to win, though, giving him his only Ring.

While having a heart attack usually spells the end of the line for most players, Hiller wasn't ready to give it up. After sitting out the entire '71 season, he was invited to the Tigers' Spring Training cam in 1972 but wasn't added to the roster. He stayed on with the team as a coach and was finally able to rejoin the roster in July of '72, and he helped the team win its division.

In 1973, he proved that he was back to stay. He made 65 appearances and set what was then a record for saves with 38. His gritty performance won him the award for Comeback player of the year, but Hiller wasn't done. In 1974, he set a record with 17 wins in relief and made the All-Star team. He stayed with the Tigers until retiring in 1980. A native Canadian, Hiller went into the insurance business in Duluth after his playing days were over.
Posted by Chris Stufflestreet at 12:26 AM