When the era of Free Agency arrived, the Cincinnati Reds refused to sign any due to philosphical reasons. This guy was the first free agent the team signed in 1980: 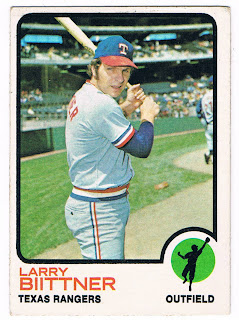 Card #249 -- Larry Biitner, Texas Rangers
Reds GM Bob Howsam is credited with building The Big Red Machine but was known for his hard line on labor matters. However, after losing several key members of those championship clubs in the market, the policy was changed by his successors.

That said, Larry Biittner is shown here as a member of the Texas Rangers, a team who were still called the Washington Senators when he first came up to the majors in 1970. He would play for the Montreal Expos and Chicago Cubs before the Reds signed him. His final season was 1983, where he returned to the Rangers to wrap it all up.

Bittner's value to his teams was his ability to play multiple positions, as well as his excellent contact. As his skills diminished, he was still called upon as a pinch hitter frequently. When he retired, he racked up 95 pinch hits. He was also asked to take the mound once in a game that was already a blowout, but the result isn't anything that would put him in a highlight reel. He allowed six earned runs in just an inning and a third, but struck out three in the effort.
Posted by Chris Stufflestreet at 8:30 AM