A Trend-Setter in the Land of the Rising Sun

This player revolutionized the way American players would be seen and used in Japan: 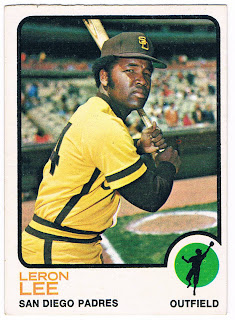 Card #83 -- Leron Lee, San Diego Padres
Although Leron Lee spent eight seasons in the majors, he was still in the prime of his career when he signed a contract to play with the Lotte Orions in 1977. He ended up playing there for eleven seasons and set the career record for batting average for all players with over 4,000 at bats. Before Lee's career, American players in Japan (sometimes derisively called gaijin) largely went overseas at the end of their careers to play for a season or two, or were decent players who just didn't have the ability to play in the majors.

Before going to Japan, however, Lee was a major leaguer. As a kid, I knew him primarily as the "other guy" on Jerry Reuss's rookie card as a member of the Cardinals in 1970. He came up with St. Louis in 1969 and traveled to San Diego, Cleveland and Los Angeles through 1976. His best season was 1972, hitting .300 on a Padres team that collectively hit .228 and even broke up a no-hit bid by Tom Seaver in the ninth inning of a game on July 4. He was one of the few bright spots on a dismal '72 season for the Padres.

Shortly after he went to Japan, he convinced his brother Leon to join him, and the two teamed up to form a feared combo. He played overseas through 1987. His  nephew (and Leon's son) Derrek Lee played 15 years in the majors, notably for the Cubs and Marlins.
Posted by Chris Stufflestreet at 8:30 AM