Today marks the two-year anniversary of this blog. To honor that number, here's a card that features two players: 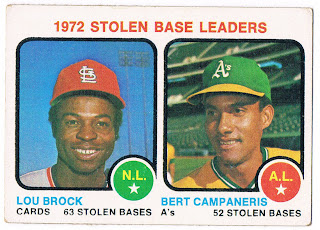 Card #64 -- 1972 Stolen Base Leaders
As a statistic, stolen bases have fluctuated in importance. They'd be a bigger deal about 10 years later, when Rickey Henderson, Tim Raines and Vince Coleman burned up the basepaths. In 1972, the year-end totals are fairly similar to the ones we've seen the past few years.

Both of the players shown above were veterans when it came to leading the league in stolen bases. This was the fifth time each had won the title. For Bert Campaneris, this would be the final one; in Lou Brock's case, he won the next two years, swiping more bases each time. In 1973, he notched 70 to pace both leagues, but in 1974 he took 118 to set a modern-day major league record.

When he retired in 1979, Brock was the all-time leading base-stealer (if you don't count Billy Hamilton, who played during the 1800s) whose record lated as long as Henderson willed it to -- he broke the mark in 1991 -- and Campaneris ended up with a very respectable 649 bases for his career.
Posted by Chris Stufflestreet at 8:40 AM