In 1973, this player was at the peak of his career, leading the National League in triples and winning the only Gold Glove of his career: 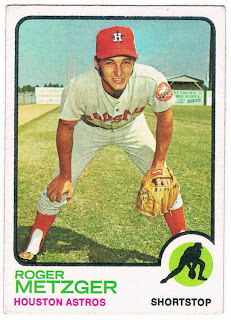 Card #395 -- Roger Metzger, Houston Astros
Here he is showing his shortstop stance during Spring Training...and obviously not in position. That is, unless the shortstop was meant to be in the outfield on a shift.

Roger Metzger was a defensive star, a regular in the Astros' infield from 1971-'78. Before he was with Houston, he was a farmhand in the Cubs' system and managed to come up to the club for a single game in 1970. Unable to get much playing time while Don Kessinger was still on the team's roster, he was traded to the Astros. He would make his mark there, playing in at least 120 games a season through 1976.

In 1978, he was traded to the San Francisco Giants and joined a star-studded infield that included Willie McCovey, Bill Madlock and Darrell Evans. Unfortunately, a chainsaw accident took off part of four of his fingers after the 1979 season. Metzger still tried to come back in 1980, but hit poorly and was released in August.

After his retirement, Metzger became a high school math teacher.
Posted by Chris Stufflestreet at 8:30 AM