Four of the players who were named to the 1972 Topps Rookie All-Star team appeared without any trophy on their card, including this guy: 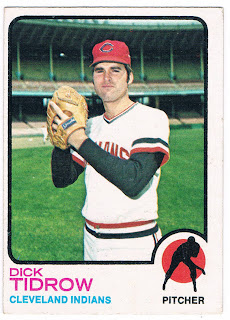 Card #339 -- Dick Tidrow, Cleveland Indians
Dick Tidrow's nickname was "Dirt," due to his penchant for getting dirty even before the start of a game. In this picture, however, Tidrow has waited at least until after the photographer leaves before getting started.

When he came up to the majors with Cleveland in 1972, he was a starter. By the time he was traded to the Yankees in 1974 (one of several ex-Indians brought over by Gabe Paul), he was converted to a set-up reliever and was part of two World Series championships during his time in The Bronx.  The went to the Cubs in 1979, the White Sox in '83 and finished out his career with the Mets the next year.

He was one of only three people who played for both New York and both Chicago teams in his career. After he retired, Tidrow was a scout for the Yankees and returned to his hometown of San Francisco in 1994. There, he worked in the Giants' front office and was instrumental in developing their current staff.
Posted by Chris Stufflestreet at 8:30 AM