Between Munson and Lidle...

This was the last Topps card featuring this player, and the only one that showed him as a member of the Braves: 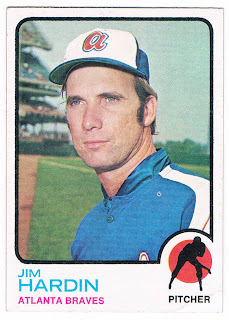 Card #124 -- Jim Hardin, Atlanta Braves
1972 was Jim Hardin's final year in the majors. He signed with the Braves as a free agent, after half a season with the Yankees in 1971. Before that, he was a member of the Orioles, where he was an early member of a very dominant rotation that included Jim Palmer, Dave McNally and Mike Cuellar. He was also part of the team that won the 1970 World Series.

His final record with Baltimore was 38-28, but there was little room for him in the rotation that boasted four 20-game winners in 1971. As a result, he was traded to the Bronx Bombers. Unfortunately, he will be remembered as a pilot, because he died in a plane crash in 1991. Upon leaving the airport in Key West, Florida, his propeller sputtered out. As Hardin tried to get back to make an emergency landing, he crashed into the parking lot of a restaurant under construction.

With that, Hardin is remembered as one of three Yankees players who perished in aviation accidents. Never mind that he was no longer active as a player (as Thurman Munson and Cory Lidle were) and never mind that he should have been remembered more for the five and a half seasons he spent in Baltimore...The fact that he was a Yankee for a half of one season and was involved in a tragic accident will obscure those facts.
Posted by Chris Stufflestreet at 8:30 AM