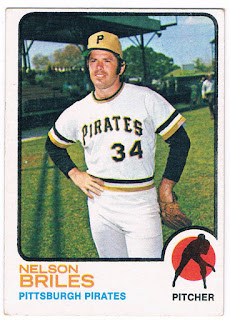 Card #303 -- Nelson Briles, Pittsburgh Pirates
Nellie Briles pitched for five different teams during a 14-year career. He managed to pitch in three World Series (two with St. Louis, and one with Pittsburgh) and was on the winning squad in 1967 and '71. With the Cardinals, he was among the team's better hurlers from 1967-'69, winning double digits each year including 19 in '68, but a slump in 1970 led to him being traded to Pittsburgh. He responded by helping the team win the World Series the next year.

He remained in Pittsburgh for three years. His final five seasons were spent with three teams: the Royals, Rangers and Orioles. He became a broadcaster after retiring and eventually worked in the Pirates' front office. Sadly, in 2006 he suffered a fatal heart attack during an alumni golf tournament in Orlando.
Posted by Chris Stufflestreet at 8:30 AM