This was the first player drafted by the Montreal Expos during their first season in 1969: 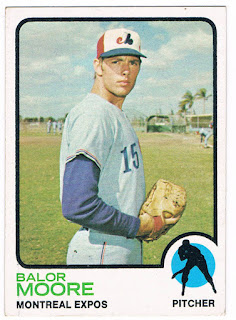 Card #211 -- Balor Moore, Montreal Expos
Unfortunately, Balor Moore would be drafted by another organization -- the U.S. Army -- a couple of years later and miss the 1971 season. After a 9-9 record in 1972 and a 9-16 showing in '73, his career was affected by a number of injuries. In 1974, he injured his ankle during Spring Training and then elbow surgery ended his season. He wouldn't return to the majors until 1977 with the Angels, then a three-year stint with the Blue Jays. He spent '81 in the minors before hanging it up.

Though Moore's career didn't end up living up to the high hopes the Expos initially had for him, he did have one highlight that needs to be mentioned. After the '72 season, Moore pitched the first nine-inning no-hitter ever tossed in the Puerto Rican League. After retiring, Moore entered the steel business and owns a pipe company in his native Texas today.
Posted by Chris Stufflestreet at 8:30 AM