Yes, His Middle Name Was Henry

In 1972, this player was traded from the Cleveland Indians to the Texas Rangers. It was his first chance to be an everyday player: 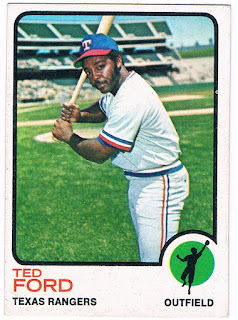 Card #299 -- Ted Ford, Texas Rangers
Unfortunately, the Rangers ended up sending Ted Ford back to Cleveland in the Spring of 1973. It would be Ford's final season in a major league uniform, getting into 11 games. He stuck around in the minors through 1974, however, before calling it a career.

Drafted by the Indians in 1966, Ford was drafted again -- by Uncle Sam -- and missed the 1968 and '69 seasons while serving in Vietnam. Once his military hitch was up, he returned to the game and made the Indians' roster in 1970. Ford was shuttled back and forth between the Tribe and their AAA affiliate in Wichita for the next couple of seasons until his trade to Texas.

Ford played all three outfield positions, filling in wherever he was needed. In Texas, he was mianly used in right field. His grandson Darren Ford came up with the San Francisco Giants in 2010.
Posted by Chris Stufflestreet at 8:30 AM