This guy was a fairly effective pitcher who took turns in the rotation and the bullpen. However, it was the way his career ended that people remember him: 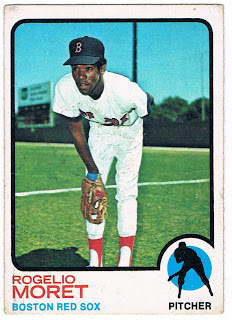 Card #291 -- Rogelio Moret, Boston Red Sox
Scheduled to pitch for the Texas Rangers early in 1978, Rogelio Moret was found in the locker room before the game in what can only be described as a catatonic state. He was placed on the disabled list and admitted to a psychiatric facility, and only pitched in six more games after that. The incident is mentioned in the movie Fever Pitch as an example of Boston's bad luck that year, but Moret hadn't been with the team since 1975.

Though he first came up with the Red Sox in 1970, it wasn't until '73 that he showed he was ready to play in the majors full time. He had always shown moments of brilliance mixed with control issues, but in 1973 he ran a string of 11 straight wins that lasted from April 22 to September 16. Always deemed to be on the verge of taking a regular spot in the rotation but never seeming to have the endurance to go deep into games, he made the most of his position as a "swingman." Moret finally took the fifth starter spot in July of 1975, which Bill Lee credited in his book The Wrong Stuff as the moment that set the Red Sox on the path to the pennant.

Though he ended the season with a 14-3 mark, he was involved in an accident where he ran into the back of a stalled truck and went to the hospital with cuts to the head. He was retained for the Red Sox' postseason roster but saw limited action. Those would be his final games in a Red Sox uniform, as he was traded to Atlanta in November. He would spend one season with the Braves before being traded to the Rangers in the Jeff Burroughs deal.

He remained in baseball after 1978, trying unsuccessfully to return in Spring Training in both 1979 and '80. He played in Mexico through 1982 and in his native Puerto Rico for several years after that. He still lives in Puerto Rico today.
Posted by Chris Stufflestreet at 8:30 AM