This guy was one of the many catchers who went on to become major league managers after taking off the "tools of ignorance": 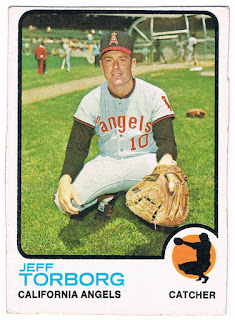 Card #154 -- Jeff Torborg, California Angels
Jeff Torborg was able to catch three no-hitters during his ten year career, including two that were quite significant. In 1965, he was behind the plate for Sandy Koufax's perfect game and in 1973 he called the pitches for the first no-hitter of Nolan Ryan's career. The other one was in 1970, when he was the catcher of Bill Singer's no-no.

Torborg came up with the Dodgers in 1964 after a standout career at Rutgers University. While there, he ran up a .537 batting average and a phenomenal 1.032 slugging percentage the year before. Despite those numbers, he was never a feared hitter during his days in the majors. Torborg was a lifetime .214 hitter, but his defensive abilities and intellectual control of the game's flow were strong enough to keep him around. He stayed with the Dodgers through 1970, and was sold to the Angels after the season. 1973 would be his final year in the majors, and this was his last Topps card as a player.

His managing career began in 1977 with a three-year tour of duty in Cleveland (you might call it a "stint," but I'll opt for a different military metaphor in this case) but that team was -- to put it mildly -- underachieving. He returned in 1989 with the Chicago White Sox and turned them around to second-place showings in both 1990 and '91. In '92 he took over the Mets...who clearly weren't the same team they were just a few years prior to that. He resurfaced in 2001 with the Expos and then guided the Marlins beginning in 2002. While that team won the World Series the next year, Torborg wasn't leading them. He had been fired early in the season.
Posted by Chris Stufflestreet at 8:30 AM