While this "Mayberry" didn't have Opie, Barney or Aunt Bea, he was a "classic" in his own right: 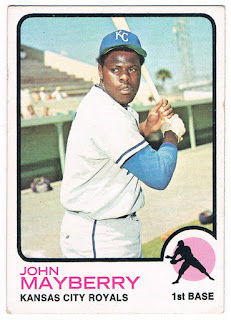 Card #118 -- John Mayberry, Kansas City Royals
John Mayberry originally came up with the Astros, with call-ups between 1968 and 1971. The team grew concerned that he was striking out too much, so he tried to be a little less wild at the plate. Unfortunately, his power numbers dropped off  and he was traded to the Royals after the '71 season.

He immediately stepped into a starting position at first base in Kansas City, and that trade is considered one of the worst of the decade. Mayberry was one of the few heavy power hitters in the team's lineup and enjoyed career years from 1972-'75. His numbers tailed off in 1976 and a falling out with manager Whitey Herzog ended up with Mayberry getting benched for the ALCS and then blamed for the team's subsequent loss to the Yankees. He was soon traded again, to Toronto, a team that had just finished its first season.

Although his level of play was reduced from what he'd shown a few seasons before, Mayberry was a veteran presence for the Blue Jays. He remained with the team through 1982, when he was traded to the Yankees. That proved to be his final season.

His son is John Mayberry, Jr., who curently plays for the Philadelphia Phillies.
Posted by Chris Stufflestreet at 8:30 AM