Last time, I featured a player who enjoyed a long career and excelled during the later years. This guy did that, too: 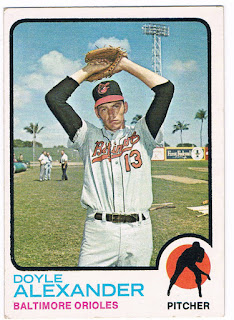 Card #109 -- Doyle Alexander, Baltimore Orioles
Doyle Alexander looks sad in this picture (despite the more tropical spring air and the palm trees around him), but 1973 would be his first winning season. However, it was the only one he would enjoy between his rookie season with the Dodgers in 1971 and his tenure with the Orioles. As a result, he was included in a massive ten-player trade between Baltimore and their A.L. East rival New York Yankees. The change paid immediate dividends, both for the Bronx Bombers, who went to the World Series for the first time in a dozen years, and Alexander, who had a 10-5 record with them as he helped to get them there. He lost game 1 of that year's World Series and signed as a free agent with Texas afterward.

Over the next several years, he pitched for the Rangers, Braves, Giants and the Yankees again. He was effective in 1977, but inconsistent after that, watching his ERA rise and his record dart around. In '83, the Yankees dropped him and he signed with the Blue Jays, a move that once again jump-started his career. He would win 17 games in both 1984 and '85 and helped the Jays win their first division title in the latter year. He went to Atlanta once again in 1986, but was traded once again the next year.

In that trade, Alexander became a Tiger, and the deal paid dividends for both teams. The Tigers' part paid off immediately, as Alexander (who at 36 was assumed to be washed up) ran up a 9-0 record and once again served as a catalyst for a division title. 1988 was another decent year, but his age finally reached up to him in '89 and he retired after the season.
Posted by Chris Stufflestreet at 8:30 AM