Here's another one of the more well-loved cards sitting in my 1973 Topps binder. It shows a man who's listed as catcher but began the season taking over in center field: 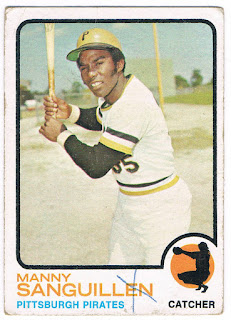 Card #250 -- Manny Sanguillen, Pittsburgh Pirates
In fact, Manny Sanguillen was the only member of the Pirates who wasn't in attendance at Roberto Clemente's funeral. As a close friend, he was busy diving in the area of the plane crash and searching for his body. And when the 1973 season started, he was standing in rightfield to replace his long-time friend. However, the new position turned out to be a bigger change than expected and he was back behind home plate by mid-June.

Sanguillen spent 13 seasons with the Pirates and was a member of their World Championship teams in 1971 and '79. He spent one season in Oakland, however, after being involved in a trade for their manager Chuck Tanner. He would spend 1977 with the A's and then get traded back to Pittsburgh during the offseason.

One of Sanguillen's talents was an ability to chase bad pitches and turn them into base hits. While that helped give him a lifetime batting average that was just below .300, he was also notorious for not drawing that many walks and his on-base percentage was lower than you'd think it might be. He was also noted for doing a lot of chatting with opposing batters in order to distract them from watching pitches.

Today, Sanguillen runs a barbecue joint inside PNC Park, where he greets fans, poses for pictures and signs autographs.
Posted by Chris Stufflestreet at 8:30 AM