This player was only in the major leagues for parts of two seasons, but was a big enough star in the Mexican League to be inducted into their Hall of Fame: 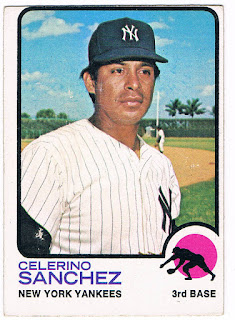 Card #103 -- Celerino Sanchez, New York Yankees
The card above shows that Celerino Sanchez was a third baseman. While he played that position exclusively in 1972, he was largely of the good field/no-hit mode, and the Yankees' acquisition of Graig Nettles ended any chance of getting any significant time at the position. He filled in where he was needed (including DH, at shortstop and in the outfield), but was little more than a bench player in 1973. As a result, he returned to Mexico. His final game as a Yankee was also the final game for Yankee Stadium before its renovation. He replaced Nettles in the seventh and drove in a run; however, the Yankees lost the game late to the Tigers.

Sanchez had been a star in his native country during the 1960s. In 1966, he won a Triple Crown in the Mexican League, hitting .448 for the season. The Yankees saw potential in him and traded to get him in 1971. After returning, he would spend the rest of the decade in Mexico (except for 1978, when he didn't play at all) to round out his career.

Tragically, Celerino Sanchez was killed because of a car accident in 1992.
Posted by Chris Stufflestreet at 8:30 AM