His nickname was "Howdy Doody," due to his similarity to the TV "star" of the 1950s. At the time this picture was taken, this player was just getting started on a very long career: 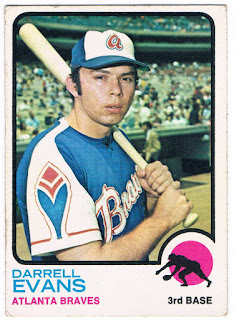 Card #374 -- Darrell Evans, Atlanta Braves
Darrell Evans played through the 1989 season, with a single season in Atlanta, the same team that first brought him up to the majors in 1969. 1973 would be his breakout year, seeing him hit more home runs in a single season than in the combined three partial seasons and one full season he'd played to that point. In fact, the Braves had three players who hit 40 homers that year (the first trio of teammates in history to do that), with Evans swatting 41 in all. He was joined by Davey Johnson, who hit 45, and Hank Aaron, who hit 40.

Evans was a solid slugger who didn't hit for average but was able to draw a lot of walks. As a result, his on-base percentage made him a much more valuable player to his team than many might have realized. However, he played third base at the same time as Ron Santo and then Mike Schmidt, so he always tended to be overlooked as a position player. His Braves coach (and then magager) was Eddie Mathews, who helped him develop into a decent-fielding third sacker; his skills at the position were sorely lacking when he first arrived as a big-league player.

In 1976, the Braves traded Evans to the Giants and was a consistent player there for eight seasons. By the early 1980s, he had started to play first as well as third. When he became a free agent after the '83 season, it is said that 18 of the 26 teams were interested in him. He was 36 years old; his fielding ability was about to decline due to age, but his hitting was considered highly enough that an American League team could use him as a DH and keep him active. And that's exactly where he ended up when the Detroit Tigers signed him.

With the Tigers, he got to play in the 1984 World Series, where he won the only ring of his career. However, he exploded for 40 home runs in '85. That made him the first player to ever smash 40 or more in each league, as well as the oldest player (at the time) to ever win a home run title. Interestingly, he beat out Carlton Fisk, who was another long-time player enjoying a late-career resurgence.  He played with the Tigers throgh 1988, before returning to Atlant for that final season.

Though he was never really considered for Hall of Fame induction, Evans was the second player with over 400 career home runs to get passed over for induction (the first was Dave Kingman, who was largely seen as a one-tool player). That said, he's been cited as an "overlooked" player by fans including Bill James.
Posted by Chris Stufflestreet at 8:30 AM