Here's another one of the unnumbered blue-bordered checklists that were included in the wax packs with the high-numbered cards in 1973: 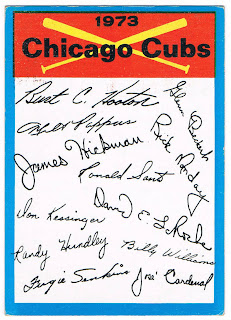 (No Number) Chicago Cubs Team Checklist Card
The border color is actually suitable for the team that's featured. Here's something worth sharing here, since I missed mentioning it in my post that featured the team photo card: 1973 was the only year between 1945 and 1984 where the Cubs were in contention going into the final day of the season. Due to rainouts, they still had four games to play against the Mets (the same team that denied of the division in 1969). They just needed to win all four games, but weren't able to.

This is the sixth team checklist card featured on this blog. So far, the only team that's "fielded" an entire team from the signatures was the same team that beat them to win the 1945 World Series...the Detroit Tigers. So let's see. Randy Hundley is behind the plate. Hickman at first, Beckert at second, Kessinger at short and Santo on third. We have Williams, Cardenal and Monday in the outfield. There are even three starters (Jenkins, Pappas and Hooton) and LaRoche in relief. For only the second time, we have a balanced team among the signatures.
Posted by Chris Stufflestreet at 8:30 AM