That Pepsi logo in the background appears to be a little bit of subliminal advertising. It's just out of focus, but we all know what it is: 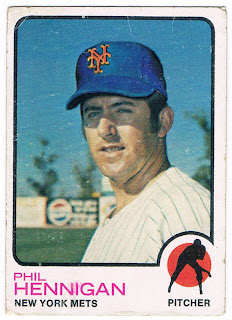 Card #107 -- Phil Hennigan, New York Mets
The picture is an airbrush job, as Phil Hennigan was traded to the Mets after the '72 season. Prior to that, he had spent his entire career with the Cleveland Indians. The trade didn't help him, though; he was sent down to the minors in July '73 and never made it back to the majors again.

Hennigan was a relief pitcher, both as a set-up man and as a closer. His career record over 126 games was 17-14 with 26 saves. That was a winning record, which wasn't bad if you consider how bad the Indians were at the time, Gaylord Perry notwithstanding. However, his record with the Mets was 0-4, which really didn't help his cause if he wanted to stay in the majors.
Posted by Chris Stufflestreet at 8:30 AM