This guy was the stepbrother of Orioles star John "Boog" Powell: 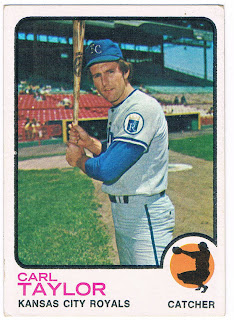 Card #99 -- Carl Taylor, Kansas City Royals
Interestingly, Carl Taylor is shown as an outfielder on this card despite splitting his career between two outfield positions along with first and third base. He went behind that plate during his rookie season in 1968 but played elsewhere in the field until the '72 season. In 1973, the Royals gave him the chance to don the "tools of ignorance" once more, and he took the catchers' mitt more times during that season than he ever had in his career. Unfortunately, the effort failed to work out. 1973 was also his final season as a player.

Taylor played in six major league seasons between three teams. He came up with Pittsburgh in 1968, went to the Cardinals before 1970 in the Dave Guisti trade and went to the Royals for Ellie Rodriguez in '71. The Pirates purchased his contract later that year, but the Royals purchased it back in '72. In 1969, he had his best season with the bat, hitting .348. That matched the number Pete Rose led the league with, but was far short of the number of plate appearances needed to qualify for the title. That was one of only two seasons that saw him hit above .250, which accounted for his rapid uniform changes.
Posted by Chris Stufflestreet at 8:30 AM