This player played for 18 seasons and every one of his games featured him wearing Dodger blue. He later took over as the team's manager, replacing Tommy Lasorda (who in turn replaced Walter Alston): 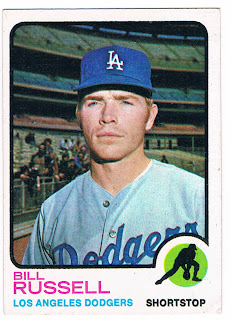 Card #108 -- Bill Russell, Los Angeles Dodgers
Among all the Dodgers who have ever played -- going back to their days in Brooklyn -- only Zack Wheat (another Hall of Famer) has ever played more games. Although Bill Russell is well-known for being one-quarter of the longest-tenured infield combination in baseball history (along with Steve Garvey, Davey Lopes and Ron Cey), he was an outfielder when he came up to the club in 1969 because they still had Maury Wills taking grounders at shortstop. Interestingly, Russell was the only member of that foursome to end his career in Los Angeles.

During his 18-year career, he was a National League All-Star three times and played in four World Series, winning a ring during the 1981 Fall Classic. His coaching career started as soon as he retired, joining Lasorda's staff in 1987. He would get a second Series ring in 1988 as a coach. Largely considered as Lasorda's "heir apparent," he was given a position as the skipper of the Dodgers' AAA affiliate in Albuquerque from 1992-'93 before returning to the parent clubs staff in 1994. When Lasorda suffered a heart attack in 1996, Russell was named the interim manager before the front office decided to let him stay. He piloted the team to a pair of second-place finishes but a slow start in 1998 led to his dismissal.

Russell has continued as a manager in the minor leagues, and is now working in MLB's umpiring division.
Posted by Chris Stufflestreet at 8:30 AM