The title of this post isn't really this player's nickname as a player (he was called "Bull"). Instead, it is a description of the job he held after his retirement: 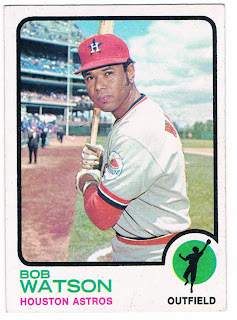 Card #110 - Bob Watson, Houston Astros
From 1998 through 2010, Bob Watson served as Major League Baseball's vice president in charge of discipline and vice president of rules and on-field operations. In that position, he was the man who doled out the punishments and fines for players and managers who step out of line.

As a player, Watson was not much of a power threat, but he was a decent contact hitter.Though best-remembered for scoring what was then billed as the one millionth run in baseball history in 1975, he also managed to hit for the cycle in each league. After acheiving the feat in 1977 while playing for Houston, he repeated it as a member of the Boston Red Sox in 1979.

Unfortunately, there were two negatives that affected Watson's career numbers. First, he came up during an era where pitchers dominated and the batting averages were generally lower. Second, he played the bulk of his career (1966-'79) in Houston, where the Astrodome was a ballpark that killed offensive numbers.

During the 1979 season, he was traded to the Red Sox, where he was able to DH as well as play first base, the position he began playing regularly with Houston by 1974. After becoming a free agent that offseason, Watson went to the New York Yankees, where he continued to split his time between first and the DH position. He finally reached the postseason when he played in two ALCS series and in the '81 World Series. Early in the 1982 season, Watson was traded to the Braves and was primarily a pinch-hitter and backup to Chris Chambliss (the man he replaced in New York). He retired after the 1984 season.

Watson became a hitting coach after his playing days were over. He was part of the staff at Oakland when they went to the 1988 World Series. The next season, he stepped into the front office as the Astros' assistant GM. In 1994, he begame the team's GM and then filled the same position with the Yankees in 1996. That year, he finally was part of a World Series champion.
Posted by Chris Stufflestreet at 3:04 PM