This guy had a long career as both a player and a manger: 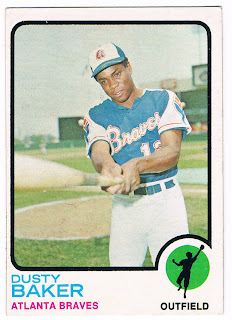 Card #215 -- Dusty Baker, Atlanta Braves
His managing career has lasted nearly as long as his playing career. He played part of 19 seasons and will begin his 19th season as a manager when the Cincinnati Reds take the field this spring.

Dusty Baker first came up to the majors in 1968 with the Braves and played there through 1975. His first season as a full-timer was 1972, the same year he took this great picture while holding out a bat. He batted .321 that season, which was good enough for third place in the National League and was also in the Top 10 with his OPB and Slugging. Ironically, as a manager, he has famously discounted OPB as a factor in crafting his lineup, preferring to judge a player's speed over his ability to get on base.

After 1975, he spent the rest of his career with teams based in California. He was most famously a Dodger from 1976 through 1983. During 1977, he was one of four Dodgers (with Ron Cey, Reggie Smith and Steve Garvey) who hit 30 or more home runs, the first team to ever claim that distinction. During those eight seasons, he went to the postseason four times and won a Series ring in 1981.

In 1984, Baker spent a single season with the Giants, followed by two more in Oakland. He returned to San Francisco as a third-base coach in 1988 and stayed on the coaching staff until taking the manager's position in 1993. That first season, he won the N.L. Manager of the Year award by leading his squad to a 103-59 record (but the Atlanta Braves were still in the N.L. West then and won one more game). He remained the Giant skipper for ten seasons, winning two division titles and one pennant in 2002. That series went seven games and featured a moment where his son Darren was pulled away from the plate before being run over by J.T. Snow, but was ultimately won by the Anaheim Angels.

Even though he took the Giants to the Series, Baker moved on to manage the Chicago Cubs in 2003. That year saw yet another postseason, but the Fates that have tortured the Wrigley faithful stepped in to somehow snatch away what was a seemingly sure victory. He remained with the Cubs through 2006 and took the reigns in Cincinnati in 2008.
Posted by Chris Stufflestreet at 8:30 AM