"One, Two, Three Strikes, You're Out"

Collectors who covet rookie cards should pay attention to this one: 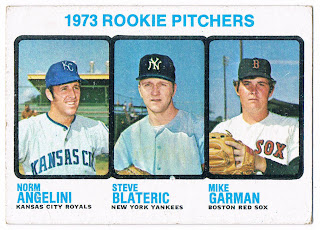 Card #616 -- 1973 Rookie Pitchers
In this case, the term "rookie" applied to the players but not necessarily the card. This was Mike Garman's third multi-player "Rookies" card. For the other two, it would be the only time Topps ever featured them on a slab of cardboard.

Norm Angelini was a teammate of Ron Cey's at Washington State. He was drafted three times and failed to come to an agreement with any of those teams, which led to him signing as an amateur free agent with the Royals in 1969. His major league career was brief, consisting of partial seasons in 1972 and '73, but he hung on for 13 seasons in the minors before hanging up the glove in 1981.

As for Steve Blateric, he pitched during three major league seasons. However, those three seasons consisted of five games, eleven innings and a lifetime 0-0 record. His only appearance as a Yankee came late in the 1972 season, a 4-inning mop-up performance in a game that was a 1-0 loss. That's why his picture is airbrushed here...he wasn't there long enough to get a picture. He also appeared in a pair of games with the Reds in 1971 and another pair for the Angels in 1975.

Mike Garman was also largely relegated to mop-up duty during his tenure with the Red Sox. After 1973, he was traded to the Cardinals, where he spent two years. After that, he went to the Cubs for 1976, the Dodgers in 1977 and split the '78 season between Los Angeles and the Expos. He managed to pitch in the 1977 postseason, where he failed to surrender a single run in four appearances.
Posted by Chris Stufflestreet at 8:30 AM