Top Shortstop of His Era?

This player was arguably the best shortstop of the 1970s: 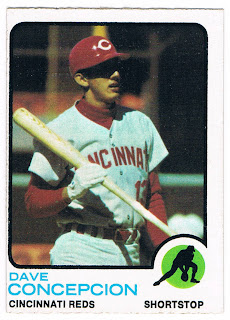 Card #554 -- Dave Concepcion, Cincinnati Reds
As a key part of the Big Red Machine that went to four World Series and won two back-to-back, Davey Concepcion has definitely earned the right to be in the conversation. He spent his entire 19-year career with the Reds, outlasting all of the other position players who accompanied him to those World Series. In fact, one of the veterans on the team during his rookie season was in his fifth year as his manager when he retired.

In fact, his long run as the team's regular shortstop ended as Barry Larkin began his own tenure at the position. As a result, the Reds had a 35-year period where two different players held down a single position. I am too lazy to look it up, but there can't be too many situations in baseball history that match that, especially since the advent of Free Agency. Unlike Larkin, however, Concepcion wasn't elected to the Hall of Fame despite being "on the bubble" statistics-wise. Perhaps having several teammates (Bench, Morgan, Perez, Seaver later on) and a manager (Sparky Anderson) getting plaques -- which doesn't mention Pete Rose -- it may be hard to argue that he belongs.

During his career, Concepcion was a decent threat with the bat; he didn't hit for power but was respected for his ability to stretch out a double. With the glove, he was nearly unstoppable. He even perfected a method of using the artificial turf at Riverfront Stadium to help speed up deep throws to first.
Posted by Chris Stufflestreet at 8:30 AM