Here's a player who spent 11 seasons in baseball, managed for another 11 seasons and was gone way too soon: 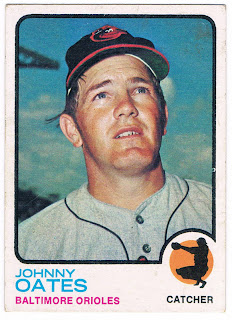 Card #9 -- Johnny Oates, Baltimore Orioles
Johnny Oates actually spent 1973 with the Atlanta Braves after being traded after the '72 season was over. However, since he was included in the first series of cards Topps issued, there apparently wasn't any time for them to summon the airbrush artist to give him a new uniform.

With the O's, Braves, Phillies, Dodgers and the Yankees, Oates was primarily a backup catche between 1970 and '81. While regraded an exceptional defensive backstop, he was a lifetime .250 hitter. He was able to make the postseason every season from 1976-'78, playing in two World Series with the Dodgers.

He was also one of the many thinking catchers who went on to become managers. The second career started almost immediately after his retirement; he guided the Yankees' AA Nashville affiliate to the Southern League championship in his first year as their skipper in 1982. The next year, he guided AAA Columbus to a first-place divisional finish. After a stint as coache for the Cubs, he moved to the Baltimore organization and won another league championship before moving to the parent club's staff.

His chance to become a major league skipper came in 1991 when he took over for Frank Robinson to lead the Orioles, the team that gave him his first big league break. In 1995, he took the reigns of the Rangers and won three divisional titles in the six full years he led them. Unfortunately, those teams were promptly trounced by the late-90s Yankee dynasty.

Fired early in the 2001 season, Oates was considering a return to managing but was dealt a cruel hand by fate. His diagnosis: a brain tumor, an agressive type that his doctors said would give him just one year. The old catcher wasn't willing to surrender the plate, though, and fought it for more than three years. He passed away in 2004.
Posted by Chris Stufflestreet at 8:30 AM