Kids these days...needing to take growth hormone drugs to play baseball. In this guy's day, he claimed he took LSD and pitched a no-hitter: 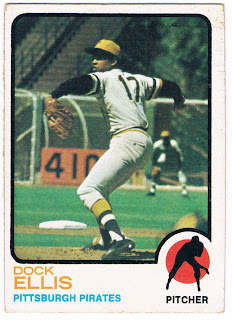 Card #575 -- Dock Ellis, Pittsburgh Pirates
Dock Ellis tossed the no-no on June 12, 1970 against the Padres despite hitting one batter and walking eight. You can watch a video with his very humorous account of that game here.

Although Ellis is probably going to be best remembered as the guy who tripped his way through a no-hitter, that overshadows a career that had its share of other highlights. When the Pirates won the World Series in 1971, he was their winningest pitcher. He also started the All-Star game that year for the National League. In 1976, he helped get the Yankees to the World Series for the first time in 12 years and won the Comeback Player of the year award.

There were a series of lowlights as well: there was an altercation with a security guard at Riverfront Stadium that ended up getting him maced. He ended up deliberately tossing at the heads of every Reds player he faced in a game in 1974. Fortunately for all involved, he was pulled from the game five batters in and before anybody got seriously hurt. He beaned Reggie Jackson in 1976 simply because he hit a monster home run off of him five years before. He had a series of incident based on perceived racism against him, as well as a near mutiny against Rangers manager Billy Hunter late in his career.

After retiring in 1979, Ellis worked as a drug counselor, which was his way of helping others after he'd been a chronic abuser himself. He worked with the Pennsylvania Department of Corrections to help rehabilitate prisoners and started a charity to raise money for research on sickle-cell anemia. Sadly, he was diagnosed with cirrhosis of the liver in 2007 and died the next year when that organ failed. He was still on the list for a liver transplant when he passed.
Posted by Chris Stufflestreet at 8:30 AM