Another Big Mound of Dirt

This guy is posing in front of the same big mound of dirt that was on Jim Lonborg's card: 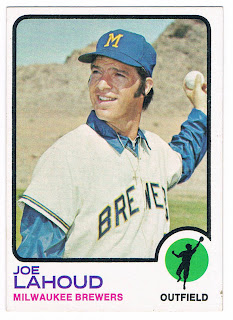 Card #212 -- Joe Lahoud, Milwaukee Brewers
In this case, Joe Lahoud isn't airbrushed into a different team's uniform. I am guessing that this photo was taken in Tempe, Arizona, which served as the Brewers' spring training home in 1972.

Lahoud was a player who was of Lebanese ancestry and played for five different teams during an 11-year career. He came up to the Red Sox in 1968 to replace Tony Conigliaro during one of his periods of injury. He was traded to the Brewers in 1971 with Conigliaro's brother Billy. He would move on to the Angels after the '73 season and played with the Rangers and Royals before playing his last major league game in 1978.

Lahoud retired with a .223 lifetime batting average, which explains why he moved around a lot, but is amazing because you'd rarely see an 11-year veteran today with those numbers unless he was a huge power threat. In Lahoud's case, he had some decent power during his prime years (taking into account the era in which he played) and had a good ability to get on base. However, the numbers weren't enough to keep him anywhere for too long.
Posted by Chris Stufflestreet at 8:30 AM