This player is airbrushed into the uniform of the team that purchased his contract midway through the 1972 season: 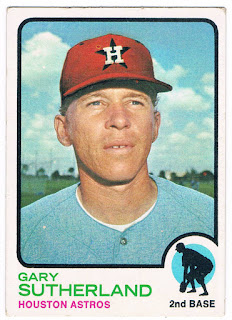 Card #572 -- Gary Sutherland, Houston Astros
Sharp-eyed readers might recognize the background as a similar area where many Montreal Expos players are shown, and that's the team where Gary Sutherland filled a roster during Spring Training in 1972. In fact, he moved around a lot, playing on seven different teams in 13 overall seasons.  He first came up with the Phillies in 1966 and moved to the Expos during thier inaugural season in 1969. His tenure with the Astros was over after '73.

He then went to the Detroit Tigers, where manager Ralph Houk made him the team's leadoff hitter. That might seem odd given his low batting average, but Houk seemed fond of placing second basemen into the first spot on his lineup (Bobby Richardson and then Horace Clarke with teh Yankees, and later Jerry Remy in Boston). He stayed in that position until Ron LeFlore arrived with the Tigers, and finished the 1976 season with the Brewers. He then spent partial seasons in San Diego and St. Louis before retiring after the '78 season.

After his retirement, Sutherland tried his hand at selling real estate in California. Eventually, he missed baseball and became a scout for the Padres in 1980. While there, he was the person who brought Tony Gwynn to the team. He remained a scout for several years afterwards, and works for the Angels today.
Posted by Chris Stufflestreet at 8:30 AM