A Moment of Levity

Candid shots are cool. Pictures that show the way players seem to be enjoying themselves before focusing on the game situation are cool. The ivy covering the Wrigley walls is cool. Here's a picture that shows all three: 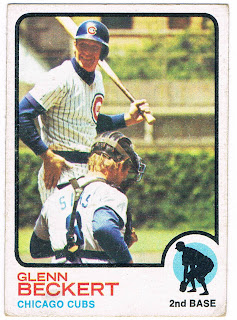 Card #440 -- Glenn Beckert, Chicago Cubs
The catcher is Duke Sims, before he was traded away from the Dodgers. Since he only played in Wrigley for two games that season, this photo was taken either June 5 or 6, 1972. 1972 was the last of four straight years Beckert was named to the All-Star team, so at the time of this photo, he had every reason to be happy...at least until that umpire makes a questionable call.

Beckert's time in Chicago was predicated by a tragedy. When Ken Hubbs was killed in a plane crash in 1964, Beckert's minor league development was sped up. He finally came up in 1965 and was quickly made into the Cubs' starting second baseman. In all, he spent nine seasons at that position for the Cubs. He was a decent hitter and a very tough player to strike out. In fact, he led the league for the fewest strikeouts five times and was in the top three every year between 1966 and '72.

1973 would be his last season in Chicago. When Topps issued Beckert's card in 1974, he was still wearing his (non-airbrushed) Cubs uniform, but was one of the players who were available as either San Diego Padres or Washington N.L. He became a utility player for San Diego, hanging it up when he was released early in the '75 season.

After his playing days, he became a commodities trader. He's still well-regarded by the Wrigley faithful.
Posted by Chris Stufflestreet at 8:30 AM