Despite his exploits as a reliever, Danny Frisella will probably be remembered for an unfortunate accident that ended his life: 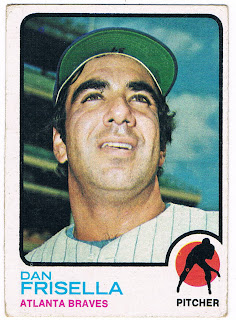 Card #432 -- Dan Frisella, Atlanta Braves
The photo on this card was obviously picked for maximum effect, as Topps didn't have a picture of Frisella in a Braves uniform. He had been traded by the Mets (where he had played his entire career) after the 1972 season. However, the low-angle shot obscured his hat to the point an airbrush artist would not be needed to "correct" the logo or even the cap color.

Frisella had come up with the Mets in 1967 but struggled as a starter and spot reliever. In 1969, he would spend most of the season in the minors and missed the team's miraculous Series win that year. In 1970, he finally earned a spot in the bullpen. After spending two seasons with the Braves, he pitched for the Padres in '75 and split '76 between St. Louis and Milwaukee.

On New Year's Day 1977, Frisella was driving a dune buggy on a county road outside Phoenix. He lost control of the vehicle and it turned over. The accident killed him. He was only 30 years old, leaving a wife and 3-year old son.
Posted by Chris Stufflestreet at 8:30 AM