Just a Couple of Pitches

What was working out to be a solid career was changed by a couple of badly-placed pitches: 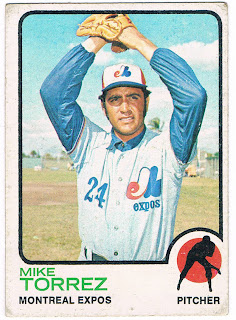 Card #77 -- Mike Torrez, Montreal Expos
In 1973, Mike Torrez was beginning his third season with the Expos after four and a half years in St. Louis. He would go on to the Orioles  in 1975 and notch a 20-win season. He then went to the A's in a trade just before the '76 season began. he notched another 16 wins there.

He was a member of the New York Yankees in 1977, winning two games of in the World Series against the Dodgers. He inadvertently helped the Bronx Bombers repeat as the American League champs, but not as a member of the team. He went to the Red Sox as a free agent before the '78 season. When they tied with the Yankees, a one-game playoff determined who would go on to the playoffs, and Torrez was named as the pitcher. In the top of the 7th inning, Torrez tossed a pitch that Bucky Dent took over the Green Monster for a three-run blast.

In one shining moment, Bucky Dent had a new middle name among the Fenway Faithful, and another 16-win season by Torrez was immediately nullified.

Torrez would stay on the Boston staff through 1982 and return to New York in '83. this time, he went to Queens and played for the Mets. In 1984, he threw a fastball that accidentally hit Astros shortstop Dickie Thon in the face. Although Thon ended up playing through 1993, his career was permanently altered as a result of the beaning. He had been a highly touted rising star, but the injury cooled any talk of his going to Cooperstown.

Torrez, meanwhile, was released by the Mets after a poor start that season, and finished his own career with a short stint in Oakland.

Having an otherwise decent career defined by two pitches seems unfair. I'm sure Torrez would love to have those two pitches back if he could. But fate is a very fickle thing.
Posted by Chris Stufflestreet at 8:30 AM