It's hard to tell for sure, but I'm guessing the picture on this card is another airbrush job: 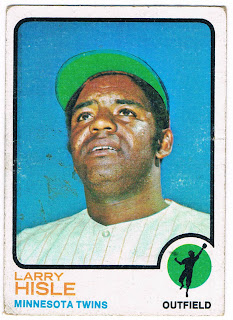 Card #622 -- Larry Hisle, Minnesota Twins
In fact, I'm pretty certain of it. Larry Hisle spent the entire 1972 season in the minors and was traded to the Twins well after the season had ended. He had last come up with the Phillies in 1971, and had gone from Philadelphia to the Dodgers and then the Cardinals in the meantime. However, he was an excellent hitter in the minors, never hitting below .300. It was only a matter of time before he found a team that could use him.

He found that home in Minnesota. Showing his unique blend of power, speed and a patient bating eye, he was a threat...even if few noticed it at the time because of his small-market team. By 1977, he was named to his first All-Star team and led the league in RBIs. However, he decided to test the free-agent market and went to Milwaukee the next year. After a promisng first season with the Brewers that saw him drive in 115 runs and make another All-Star team, he tore a rotator cuff early in '79 and wasn't the same player after that. He was limited mainly to a part-time DH from then until 1982.

After he retired, Hisle became a hitting coach. During his tenure with teh Blue Jays, he was part of two World Championship teams and helped his batters John Olerud, Paul Molitor and Roberto Alomar finish 1-2-3 as the league's best batters in 1993.
Posted by Chris Stufflestreet at 8:30 AM