Give That Man a Helmet

A series of unfortunate baseball-related injuries shortened the career of this player: 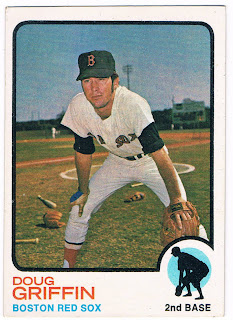 Card #96 -- Doug Griffin, Boston Red Sox
Standing among several pieces of equipment including an unfortunately placed glove, Doug Griffin should have been extra careful to watch his step. As a "good field, no hit" second baseman, Griffin sure knew how to take his share of hits.

A couple of beanballs -- including one from fireballer Nolan Ryan in 1974 -- caused Griffin to have concussions and temporary hearing loss. Though he quickly recovered from both, his playing time diminshed along with his abilities afterward. He had been the regular second baseman for the Sox since 1971 and won a Gold Glove in '72, but the team acquired Denny Doyle before the '75 season to replace him as an everyday player. That season saw the BoSox get into the World Series, and Griffin contributed as a part-time player. He didn't get into the A.L. Championship series but made one appearance against Cincinnati in the Big Dance.

The Red Sox finally let him go early in the 1977 season, and Griffin left baseball altogether. He went into construction, a job that may not seem so tough to somebody who took one in the ear from Nolan Ryan and walked away.
Posted by Chris Stufflestreet at 8:30 AM