Could He Throw a "Beene" Ball?

The title of this post is a play on the last name. There doesn't seem to be much evidence that his guy was a headhunter on the mound: 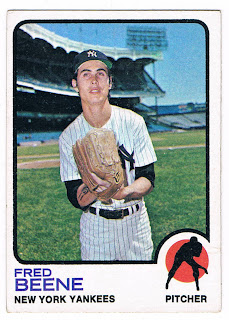 Card #573 -- Fred Beene, New York Yankees
In fact, during his seasons with the Yankees, Fred Beene was able to keep his ERA just below 2.00.

Been started his career with the Orioles, where he was on a constant shuttle between Rochester and the parent club from 1968-70. Dealt to the Padres, he spent the entire '71 season in the minors. In 1972, the Yankees picked him up in a straight-up trade for career minor leaguer Dale Spier. Despite a couple of good years for the club, Beene was dealt to Cleveland early in the 1974 season, and he finished his major league career with The Tribe the next year. He wasn't done playing, however; he kicked around the minors through 1979.

For the most part, Beene was a set-up reliever despite being a starter during his minor league career. However, the Orioles were set with starters during his tenure with the team and Beene had to take the ball where his services fit. His best season was 1973, when he went 6-0 with a 1.68 ERA.

After he retired, Beene spent 20 years as a scout for the Brewers.
Posted by Chris Stufflestreet at 8:30 AM