For the last post of 2010, it may be appropriate to feel a little seasonably blue. Or... 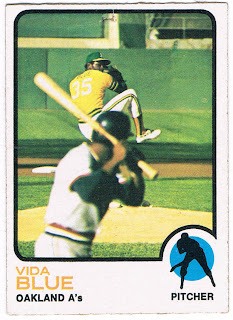 Card #430 -- Vida Blue, Oakland A's
This is a great picture. Blue is delivering his pitch, the batter (a Minnesota Twin, it looks to be...Oliva or Carew, perhaps?) is waiting with his hands choked up on the bat. A rosin bag is seen laying on the mound, just below the batter's arm. The bag at second base is clearly seen, but for whatever reason, there are no other players in the photo. However, since this moment is just between the pitcher and batter, anybody else is pretty much irrelevant.

Vida Blue was a rarity: a hard-throwing lefty. Some players said he threw harder than anybody who wasn't named Nolan Ryan. His best pitch was a fastball that neared 100 MPH, and he made sure he used it. And when he entered the league, few hitters knew what to do with him. In 1970, he was called up to the parent club in September and pitched in just six games. Two of those were complete-game shutouts, one a ho-hitter and the other a one-hitter. In 1971, he was such a force on the mound that he ended up getting both the MVP and Cy Young awards with his 24-8 record and 1.82 ERA. He was the youngest A.L. MVP of the 20th century and one of a select few to win the MVP and Cy Young in the same year.

In 1972, he came back down to earth, posting a 6-10 record but still helping the A's to win the World Series. He won 20 games again for '73 and would remain an important part of the team's rotation throughout its dynasty years. However, he would get caught up with owner Charlie Finley's antics in trying to dismantle his team before free agency did it for him. Commissioner Bowie Kuhn vetoed two trades involving Blue (to the Yankees in '76 and the Reds in '77), saying they were "bad for baseball" because both involved a powerful pitcher being sent to powerhouse teams with little going to the A's in return.

Vida Blue was finally traded to the San Francisco Giants for 1978. After four years there and two with the Kansas City Royals, he had some public issues with drug problems. After the 1983 season, Blue was arrested for trying to purchase cocaine (and later testified in the 1985 Pittsburgh drug trials). He was out of the game for 1984, but returned to spend the 1985-'86 seasons with the Giants before retiring.

Despite the negative news that dominated his later career, Vida Blue has been active since his retirement in charitable causes among inner-city kids and promoting baseball. With that, this blog bids farewell to the year 2010 and hopes for a very eventful 2011. Happy New Year!
Posted by Chris Stufflestreet at 8:30 AM