Today's card features a nice portrait of a solid hitter and power threat, standing in front of the unmistakable facade that once adorned the old Yankee Stadium: 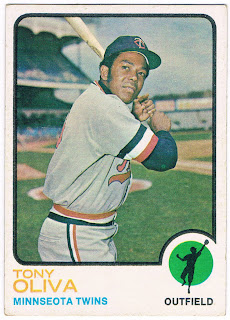 Card #80 -- Tony Oliva, Minnesota Twins
While Topps made sure it placed the right player picture on the card and did a decent job getting it centered and cropped, they forgot to check and see if the name "Minnesota" was spelled correctly.

Cuba-born Oliva (birth name Antonio Oliva Lopez Hernades Javique) had a great batting eye, speed on the bases, a strong throwing arm and could hit for power as well. Those are great attributes that helped get Olive elected to the All-Star team his first eight seasons. They also earned him a Rookie of the Year Award in 1964 and contributed to a World Series appearance (but not a ring) in 1965. He consistently hit .300 in an era where superior pitching often prevented that. However, knee problems would hamper Oliva's playing time in 1972.

When he returned from surgery in '73, he was no longer able to play in the outfield as an everyday player. Fortunately, the American League implemented the designated hitter role, so Oliva would spend the next four years in that role. His career numbers were impressive, but early injuries limited his time in the league and effectively squashed his chances at being inducted into the Hall of Fame. He's still a beloved player to Twins fans, though. The team retired his number in 1991 and made him a charter member of their own Hall of Fame in 2000.
Posted by Chris Stufflestreet at 8:30 AM