Here's a player we've seen (perhaps a little too much of) in another card featured on this blog: 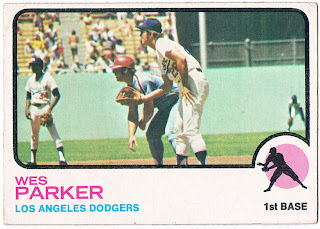 On what seems to be a slow day at Dodger Stadium -- check out all the empty bleacher seats -- Parker appears to be holding Greg Luzinski on first. Lee Lacy, a 1972 rookie,  is standing at his second base position (the Dodgers' more familiar second sacker Davey Lopes didn't play his first game until late in the '72 season). As for Wes Parker, 1972 would be his last year in the major leagues. He moved into the broadcast booth for the Cincinnati Reds for '73 and then played one season in Japan in '74.

While Parker's retirement ended a nine-year association with the team, it ushered in another important era. Since Steve Garvey moved over to first in place of Parker, he would soon team with shortstop Bill Russell, the aforementioned Lopes and Ron Cey to form what became baseball's longest-tenured infield combo.
Posted by Chris Stufflestreet at 8:30 AM