As time goes on, more of the players featured in the 1973 Topps set are going to pass away. It's a sad fact of life, but it's something that happens to every one of us. One player passed away on December 2nd: 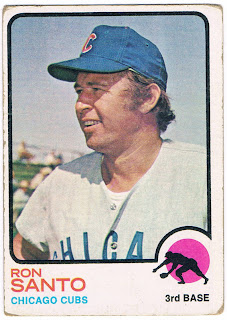 
Time has been good to Ron Santo. Though not given a lot of attention for Hall of Fame balloting when he was initially eligible, his career has been given added attention over the years to have him considered one of those players who are definitely on the bubble. Such is the benefit of endearing yourself to the Wrigley faithful over the course of nearly 50 years.

While detractors say his career was far too short, Santo hid the fact that he was fighting type 1 diabetes during his playing days. In the 1960s, having a medical condition was seen in a much different light and methods of controlling glucose and insulin levels were rather primitive. Despite his health issues, he managed to become one of the premier 3rd basemen of the 1960s. Unfortunately, he played for a team that didn't get much opportunity for postseason glory, which hurt him.

1973 was Santo's last season with the Cubs as they slowly dismantled the team that almost won the division in 1969. He would be the first player to use the "5 and 10" rule given to players as part of the deal that stopped a player strike from '72 and allowed players who had spent 10 years in the majors (or 5 with their current team) to veto a proposed trade. The Cubs were planning on sending him to the Angels, but Santo didn't want to play on the West Coast. Instead, they sent him to the White Sox and let him remain in Chicago. After spending '74 on the Southside, Santo retired.

He would go on to become a broadcaster noted for his enthusiasm. While many announcers feel they need to put on a front and drop any slight traces of favoritism, Santo was unabashed in his loyalties to his former team. While he was known to cheer at the Cubs' highlights, he was just as quick to criticize their lowlights as well. This only endeared him to the fans.

So, will Ron Santo be elected to the Hall of Fame now that he won't be around to see his plaque? Time will tell. However, being a long-time broadcaster (and a definite booster) for one's previous team certainly helped Phil Rizzuto get inducted 38 years after he retired, so there's hope for Santo's fans.

(Update: Santo did get called to Cooperstown. It was announced on December 5, 2011 that he was elected into the Hall of Fame's 2012 class through its Veteran's Committee.)
Posted by Chris Stufflestreet at 8:30 AM