Show Me the "Cash"

Baseball fans know that Johnny wasn't the only cool guy named Cash. There was also Norm Cash and this guy: 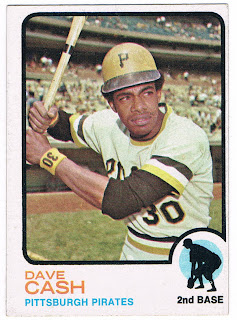 Card #397 -- Dave Cash, Pittsburgh Pirates
Not a lot to say about the photo, except that he looks like one mean MF with a bat. I also notice that his uniform number is printed on his wristband.

Dave Cash was born in Utica, New York, which is actually a short distance from where I grew up. Well, close is a relative term in that part of the state, since everything is so spread out. It was about an hour's drive away...but if you wanted to get to my childhood home using the New York State Thruway, you got off at Utica and took a scenic drive where you saw more cows than you ever knew existed. Literally. My wife (who is from Long Island) took her first trip there when we were dating and was absolutely amused because she had never seen so many cows in her life. But then again, her idea of New York State was a lot different from mine, as she came from a part of the state where they give little thought to what lay beyond Yonkers.

But I digress (which I tend to do when the topic turns toward where I grew up)...

Dave Cash replaced Bill Mazeroski as the Pirates' second baseman. He was part of the team's 1971 World Series championship team, playing in all seven games. However, with Rennie Stennett making his way up to the team, Cash wasn't destined to be a regular player there. As a result, he was traded to the Phillies after the '73 season.

Cash enjoyed his best years in Philadelphia, making the All-Star team each of his three seasons there. However, he tested the free agent market in '76 and ended up with the Expos. Though his numbers declined there, he was still a threat with the bat and actually became harder to strike out. He would finish his career in San Diego in 1980.
Posted by Chris Stufflestreet at 8:30 AM