At the time this card showed up in packs, this was the active career strikeout leader: 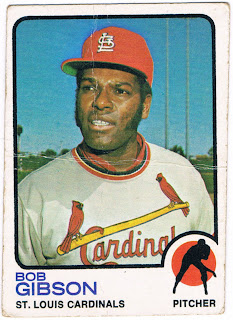 Card #190 -- Bob Gibson, St. Louis Cardinals
Besides striking a lot of people out, Bob Gibson did other things. He threw 3 games in a World Series 3 different times. He did commentary for basketball games and played with the Harlem Globetrotters. He was a musician who appeared on The Ed Sullivan Show with Series rival Denny McLain. He was also one of the pitchers that batters didn't like to face before Nolan Ryan came along.

As a kid, he was handed some cards that would have meant bad things to come for many others. His father died before he was born. He had issues with rickets and pneumonia as a child. However, he used his athleticism to get into Creighton University on a full scholarship. After that, he went pro in both baseball and basketball. After making the major leagues for good in 1959, he quickly became of of the most dominant pitchers of the 1960s outside of Sandy Koufax. In 1968, he was so dominant, the leagues adjusted the height of the mound to give batters more of an advantage. He struck out 35 in the '68 World Series, 17 of those in one game. In 1971, he threw a no-hitter against the Pirates. He also became the second person (after Walter Johnson) to strike out 3,000 batters. He wasn't bad with the bat, either. He was occasionally called on to pinch-hit and is only of only two pitchers since World War Two with a career average over.200.

He was also known for being gruff and abrasive, even with his teammates. Rookies were warned not to dig in against him, unless they wanted to get knocked down. When his close friend Bill White was traded to Philadelphia, he was hit in the arm the first time he faced Gibson.

After retiring in 1975, "Hoot" was inducted into the Hall of Fame on his first ballot in 1981. His uniform number 45 was retired the same year.
Posted by Chris Stufflestreet at 8:30 AM