In recognition of this blog's 100th post, today 1973 Topps Photography is pleased to present card #100 from the '73 set. As Topps was quite fond of reserving the cards numbered in multiples of 100 for the biggest stars of the game, there should be little surprise that card #100 is one of the biggest of all time: 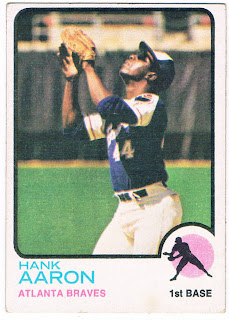 Card #100 -- Hank Aaron, Atlanta Braves
Of course, the man shown shagging a fly ball needs little introduction among baseball fans. Though I'll say it looks more like he's playing in the outfield than at first by looking at the glove, but the photo really doesn't give a definitive answer.

Since Hank is so well known to baseball fans, I'll skip the recap about his career and instead focus on his incredible season in 1973.  During the '72 season, he surpassed Willie Mays as baseball's second-best home run hitter. While Mays was definitely declining at the late stage of his career, Aaron may have surprised casual fans by getting so many homers. He never hit more than 45 in a season and wasn't known for booming shots like other home run hitters were. However, he was consistent; in 1973 -- at the age of 39 -- Hank notched another 40 home runs. At the end of the season, he had a total of 713, only one shy of the all-time record held by Babe Ruth. He hit the final homer with one game left but needed to wait until '74 to tie and then pass Ruth. That must have been one heck of an offseason, if only to let Hank get the chase over with.

Ruth, Aaron and Mays all share card #1 in the '73 Topps set, a card I'll get to eventually on this blog.

Aaron was one of three Braves who eclipsed the 40-homer mark in '73, along with Davey Johnson and Darrell Evans.

Hank would leave Atlanta after the '74 season, returning to Milwaukee to play a couple of years as a DH. He retired after '76 and was a first-ballot Hall of Famer in 1982.
Posted by Chris Stufflestreet at 8:30 AM