There was a little theme to this week's entries. Monday, Dave Cash appeared. On Wednesday, it was Bobby Bonds' turn, today...a little something that won't be turned down at Christmas: 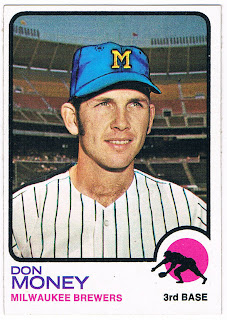 There's no need to wonder why a player from the Milwaukee Brewers would be standing in Veterans' Stadium in Philadelphia when they weren't yet in the National League in 1973. Not when Don Money looks to be wearing a cartoon uniform.

Of course, Money had been with the Phillies through 1972 and was wearing that team's uniform when the picture was taken. When he was traded to Milwaukee in late October, the Topps people commissioned their airbrush artist to go to work. Though he had been with the Phillies since 1968, Money was signed by Pittsburgh but traded across the state in a deal for Hall of Famer Jim Bunning before getting to the parent club. He would go on to play eleven seasons with the Brewers and was named to the All-Star team four times for them.

He retired after the 1983 season and decided to try playing in Japan after seeing video of the Yomiuri Giants and being impressed by their crowds and clean facilities. However, he ended up signing with the Kintetsu Buffaloes, who weren't so beloved. He ripped up his contract after only a month and went home. Money later became a manager in the minor league system. Today, he's the skipper of the Nashville Sounds, the AAA affiliate of the Brewers.
Posted by Chris Stufflestreet at 8:30 AM