Get Down and Boogie!

Among the horizontal photos used in the 1973 Topps set, some are great, while others are questionable and downright silly. Look at this one: 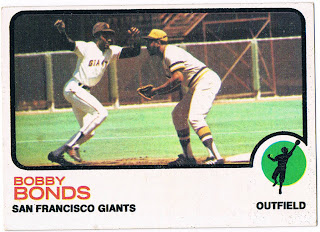 Card #145 -- Bobby Bonds, San Francisco Giants
Bobby Bonds appears to be showing Willie Stargell a new dance step, but he's heading back to first to avoid a possible pickoff attempt. That was probably a common occurrence, since Bonds was known as a speedy runner. He's also known for his propensity to strike out at the plate. Interestingly, when he retired, Bonds was third among all players in career strikeouts. One of the two players ahead of him was Stargell (Reggie Jackson was the other one).

It's still sad to see that neither of these players is still with us.

At the time, Bobby Bonds had been with the Giants since 1968. In his very first game, he hit a grand slam. In 1973, he set a record for leadoff home runs (since broken) and almost became the first player to get 40 home runs and 40 stolen bases in a single season, missing the mark by one homer. He was also named MVP of that year's All-Star game.

After 1974, he would be one of the most traveled players in baseball, spending the next seven seasons playing for seven different teams. After being traded to the Yankees, he bumped around on the Angels, White Sox, Rangers, Indians, Cardinal and Cubs. His stint with California was the only one that lasted longer than one year.

After he retired from the game, he became better known as the father of Barry Bonds.
Posted by Chris Stufflestreet at 8:30 AM