Painful Play at the Plate Shot

This had to hurt: 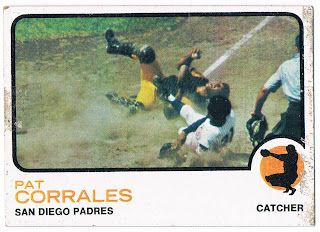 Card #542 -- Pat Corrales, San Diego Padres
The runner, Fergie Jenkins, is out. You can see the ump getting ready to call it. Pat Corrales is still holding the ball in his right hand, with a look on his face that can only be described as sheer agony. It has been retorted that the look on his face is understandable because he had to wear that San Diego uniform in a public arena, the picture puts the play in context.

This may be one of my favorite photos in the entire 1973 Topps set because it tells quite a story.

The picture was taken during the bottom of the second inning of a game at Wrigley Field on June 14, 1972. A few months back, Play at the Plate Dude described the action in his blog, so here's a link to that post. This was Corrales's second game with the team, after being traded from the Reds on June 11th.

1973 would be Corrales's final year as a player after several years spent backing up Johnny Bench and others behind the plate. He would go on to manage the Texas Rangers, Philadelphia Phillies and Cleveland Indians between 1978 and 1987.  He was the first major league skipper of Mexican ancestry, and he was also the first to be fired when his team was in first place. In 1983, the Phillies were in first but barely over .500, so the owners decided to make a change.
Posted by Chris Stufflestreet at 8:30 AM