The Man the Award Was Named After

After featuring a Hall of Fame pitcher last time around, here's another: 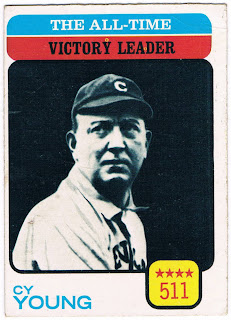 Card #477 -- Cy Young, All-Time Victory Leader
In today's game, a pitcher who gets 300 wins is considered to be among the greats. Here's a guy who won more than 500 of them. The list is rather top-heavy with players whose career began in the 1800s due to the different nature of the sport back then. Pitchers were often two or three-man rotations and were expected to stay in the game longer. There weren't things like set-up men, closers and pitch counts then. Pitchers didn't leave the game to rest. That was what they did after the game.

Of the Top 10 list on the back, the only player that may have been familiar to kids in 1973 was Warren Spahn. He was the only pitcher who had played since the 1920s. Since then, only three pitchers have managed to elbow their way onto the all-time Top 10 victories list: Steve Carlton, Roger Clemens and Greg Maddux. As far at the active player list, there's not much hope for another addition anytime soon:

Going back to Cy Young...modern fans remember him both for the 511 wins and the Award in his name that is handed out every year to the best pitcher in each league. However, it's interesting to point out that Young wasn't inducted into the Hall of Fame the first year he appeared on the vote. That first year, both Walter Johnson and Christy Mathewson received more votes than Young. He was eventually voted into the Hall of Fame in 1937.
Posted by Chris Stufflestreet at 8:30 AM