Here's a guy who played for a very long time, and at a position that was quite physically damaging: 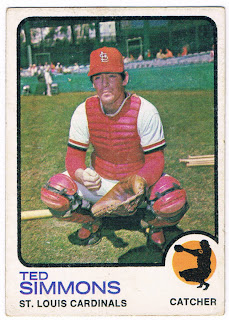 Card #85 -- Ted Simmons, St. Louis Cardinals
Ted Simmons was one of the better-hitting catchers of his era, even if he was overshadowed by Johnny Bench for much of his career. He was well-renowned as a switch hitter and also known as one of the smartest men playing in the game.

In part due to his "smarts," Simmons was one of a small handful of players who began 1972 without a contract. After a short players' strike that delayed the opening of the season, a few decided to complete one season without being under contract to see if they could test the reserve clause. In Simmons' case, he became a valuable tool for the Cardinals and was eventually offered a deal before the season was through. He remained with the Cards until after the 1980 season, when disagreements with manager Whitey Herzog got him banished to Milwaukee.

In 1982, Ted Simmons had the pleasure of facing off against his old team in the World Series. The Brewers lost, but not due to a lack of effort on the part of Ted Simmons, who hit two home runs. He stayed with the Brewers until being traded the the Braves in '86. After three years as a utility player and pinch hitter, Simmons retired.

When he hung up his mask for good, Ted Simmons held several all-time records as a catcher including hits and doubles. He also held the National League's record for home runs by a switch-hitter. All of these marks have since been broken, but that doesn't diminish the role he played over a 21-year career at one of the hardest positions in the game.
Posted by Chris Stufflestreet at 8:30 AM