With the holidays upon us, today's blog post focuses on family. Or, as this one goes, family members: 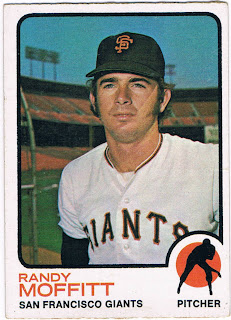 Card #43 -- Randy Moffitt -- San Francisco Giants
Beyond the background image of Candlestick Park and those very-70s sideburns, Randy Moffitt had quite a legacy to live up to, which is mentioned on the back of this card.

His sister is Billie Jean King, the tennis star. In 1973, she won the vaunted "Battle of the Sexes" against Bobby Riggs and also won Wimbledon for the fifth time. Among the best tennis players in the world at that point, that may have made for interesting discussion at family dinners:

"Big deal. Your sister got to meet the Queen again. Pass the potatoes."

This was Moffitt's first Topps card. He had debuted with the Giants in 1972 and spent 10 seasons with the club as a dependable reliever, just as the "fireman" position was becoming more of a specialized thing in the game. He would go on to pitch for one season in Houston and another in Toronto before leaving the game after the '83 season.
Posted by Chris Stufflestreet at 8:30 AM